The Old Train from Nairobi to Mombasa

Have you ever thought of traveling from Nairobi to Mombasa by train? Are you still planning to do it? If yes, then it’s time. Kenya’s Standard Gauge Railway line is being launched in a few months (around June 2017). The scenic beauty of traveling for over 15 hours will be replaced by a 4-hour trip between these cities.

When traveling between Nairobi and Mombasa, you can have the option of either taking an 8 hours bus or a 45 minutes flight. If you have 15 hours to spare, I highly recommend you use the train. This is one of the most epic and amazing things to do whether visiting or living in Kenya. It is very comfortable and secure.

This post is based on personal experience and an account of the journey. From it, you will get information on prices, schedules, accommodation, and the nature of the Jumbo deluxe train from Nairobi to Mombasa. All prices and services are as at the time of writing this post. 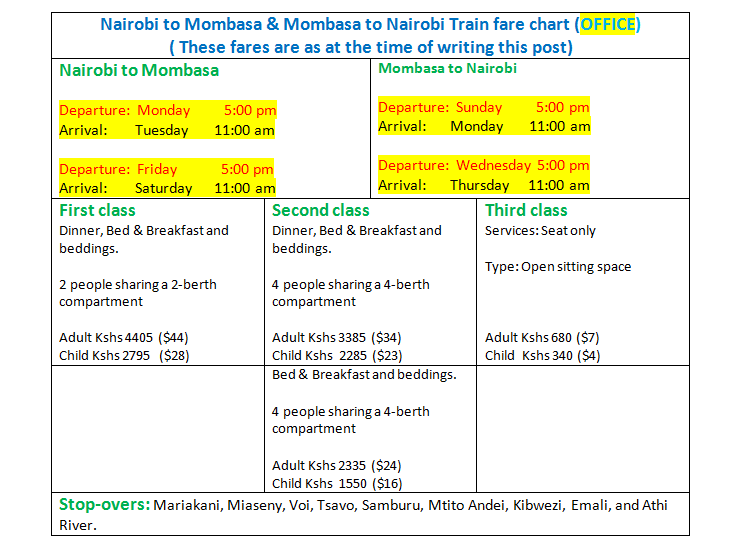 In early April 2017, I embarked on a backpacking trip to the North coast of Kenya. Being a budget traveler and an adventure junkie, “The iron snake of Africa” was the best choice. 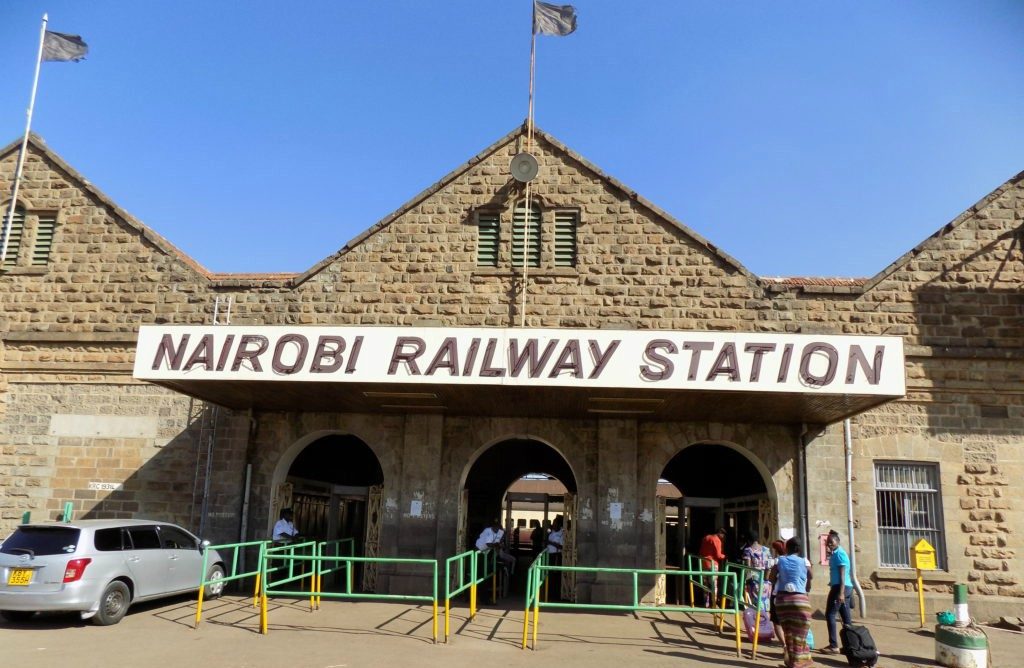 I got to the Nairobi Railway Station at around 4:00 pm. At the main entrance, I took off my camera from its bag and took a picture of the big signboard reading “Nairobi Railway Station”. Inside the station, I headed to the reception desk on the left where I was given a ticket and a card with details of my car and compartment number. The train was parked along the third railway line accessible via an underground tunnel.

The car and the compartment 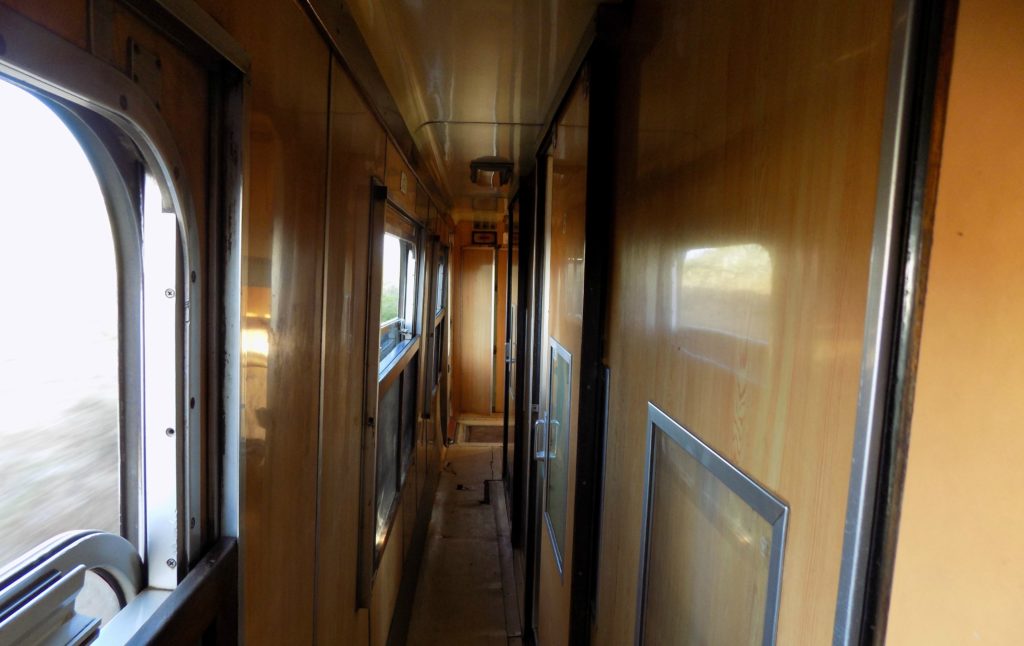 By the time I got into compartment D of car number 2322, it was already 16:32 pm. I was sharing the compartment with Zhou, a young Chinese man who was traveling around the world. He was going for a backpacking trip to the south coast of Kenya for two weeks then head to Zanzibar before flying back to China. The adjacent compartment was shared by four security officers from the Kenya police. The jumbo deluxe train has been in operation since the 1900s and is designed to British standards: 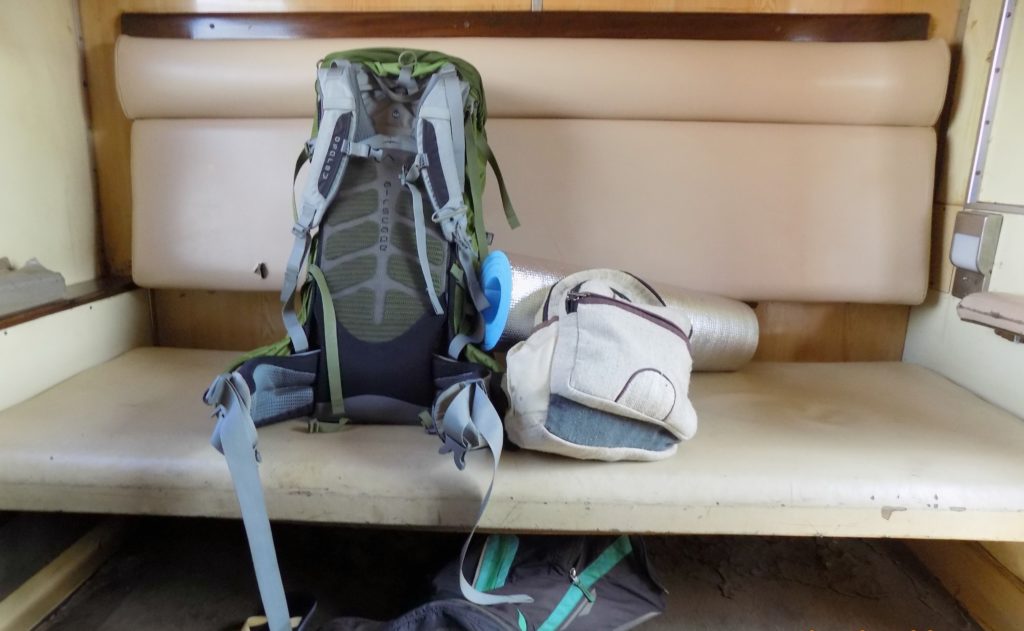 The Bunk/Berth inside the compartment

The compartment had four bunks which served as a sofa during the day and a bed at night. By the large window, there was a sink and a small shelf to store variables. A few minutes later, an attendant came in with beddings. As backpackers, each of us had our own personal gear (A light blanket, pillow, and sleeping mat) so we ended up not using the train-provided bed sheets, blanket, and pillow.

The Iron snake of Africa

At exactly 5:00 pm the train left Nairobi for Mombasa.  Along the railway line leaving Nairobi, we passed markets, factories, kiosks, flats, and informal settlements. You could see school children waving at the excited passengers who were leaning on the windows taking pictures, watching the rich view of the sunset, and enjoying the scenic surroundings.

Zhou and I shared travel stories of different destinations we had been to and our next plans. Afterward, I walked along the narrow corridors of the car in search of toilets and ended up in the third-class car. Unlike the first and the second class cars, the third class car was open with only seats. It was mostly comprised of traders who had traveled to Nairobi to buy wares and farm produce to sell in their town centers. Most of the traders alighted along the way and by the time the train arrived at Mombasa station the car was almost empty.

Train from Nairobi to Mombasa

As the nights fell, you could hear the sound as the train chugged down the track. Watching the stars in the sky as they form the Milky Way, the sound of crickets, and the voices of men and women as they disembarked the train at different points was very refreshing and amazing.

At around 9:00 pm I headed to the restaurant car.  I ordered a cold tusker while having a chat with one of the train attendants. He left for bed at 10:30 pm while I started reading a book I had carried with me until half-past midnight. I woke up to the knock on the door. “Good morning, it’s breakfast time”, the train attendant said. Looking at the window, I saw a post indicating that we were in Samburu, a village in Kwale County.

Breakfast was served from 7:30 am in the restaurant car which was about five cars from my compartment. Passengers normally sit in fours. I joined a group of three British ladies who were also traveling to the North Coast. After a few minutes of introductions and conversations, we were served breakfast. 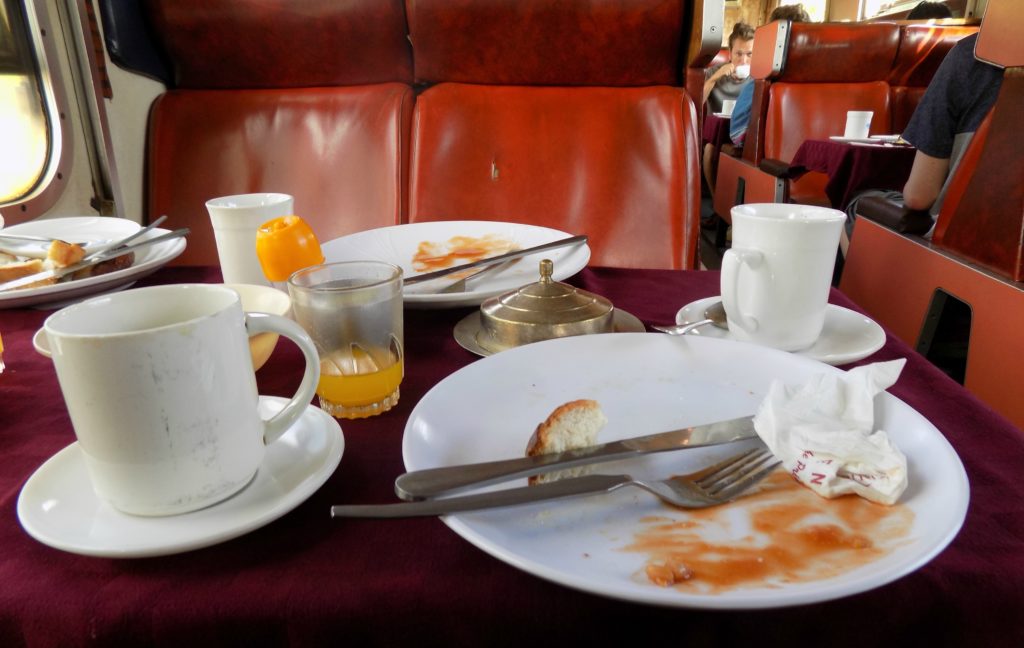 Breakfast in the Restaurant car

After breakfast, I headed back to the compartment and after a while, the attendant came to collect the beddings. At this time Zhou and I were recapping the overnight train experiences. He was up for most of the night watching the stars and distant lights from settlements along the railway. From Samburu village, we passed through sisal plantations, settlements, and bushlands. The temperatures started rising, a sign that we were approaching Mombasa. After about an hour the sea was in sight. I could see ships from far and the tall coconut trees as the train slowed down. 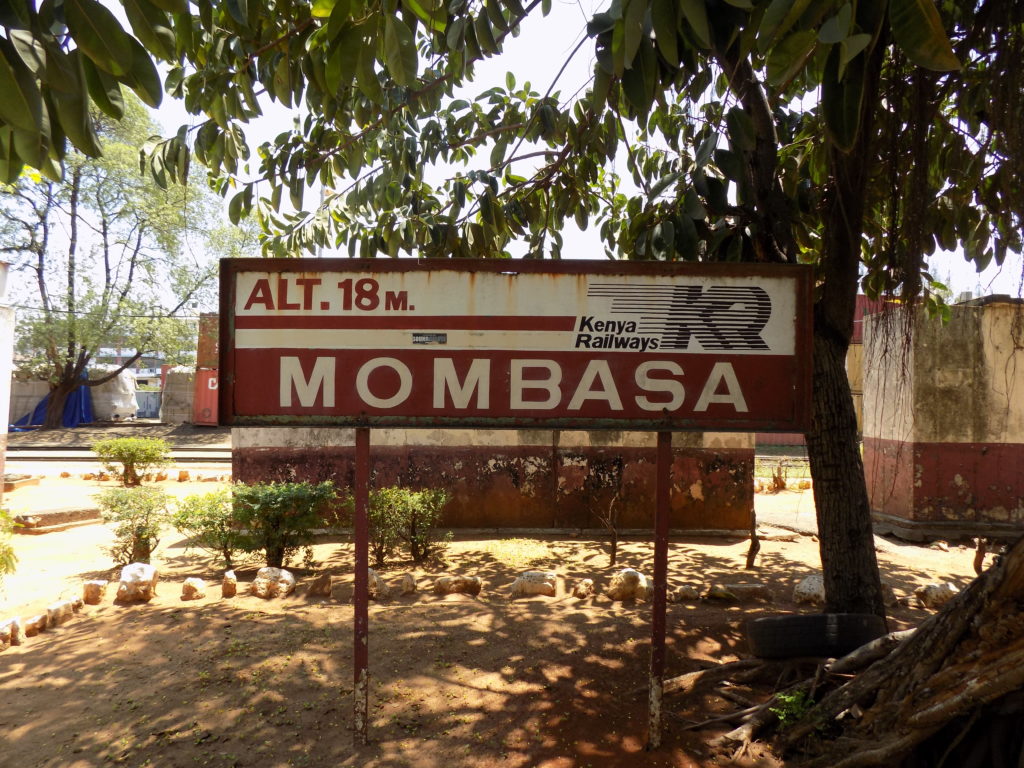 The train arrived at Mombasa a few minutes after 11:00 am. The passengers alighted eager to head to their next destinations. I exchanged contacts with Zhou and said goodbye to the security officers. From that point on, my backpacking journey along the North coast began.

The train runs on, Monday and Friday from Nairobi to Mombasa, and, Sunday and Wednesday from Mombasa to Nairobi. A one-way journey from either destination is about 15 hours though it can be more if there is any delay.  Note that the fare is at the ticket office price. If you pre-book through a reliable agency it is usually an extra $10-$15 including meals. 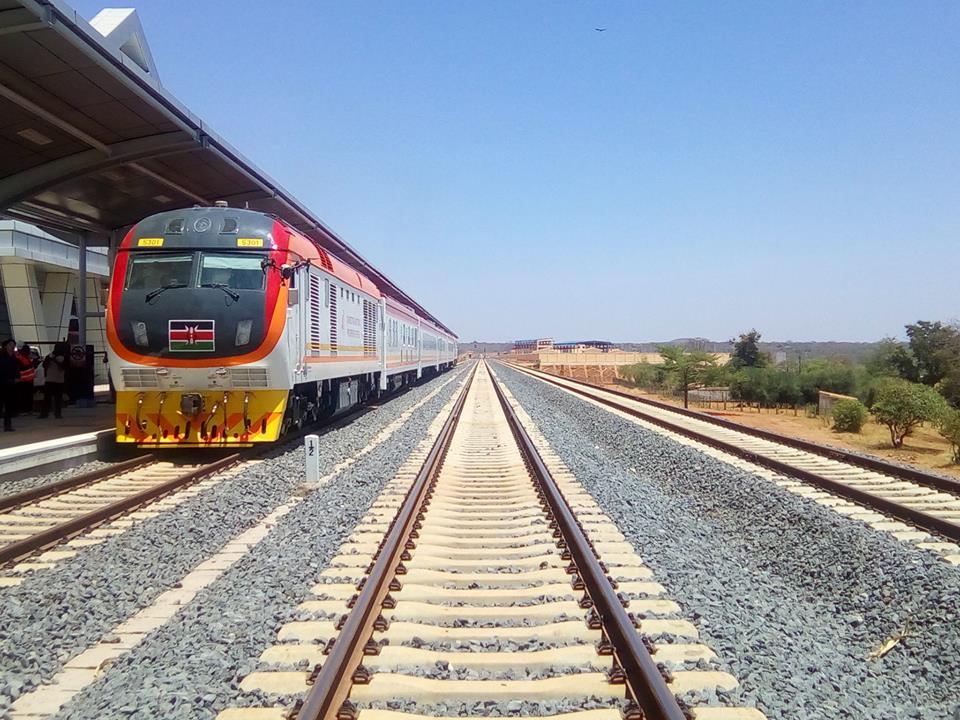 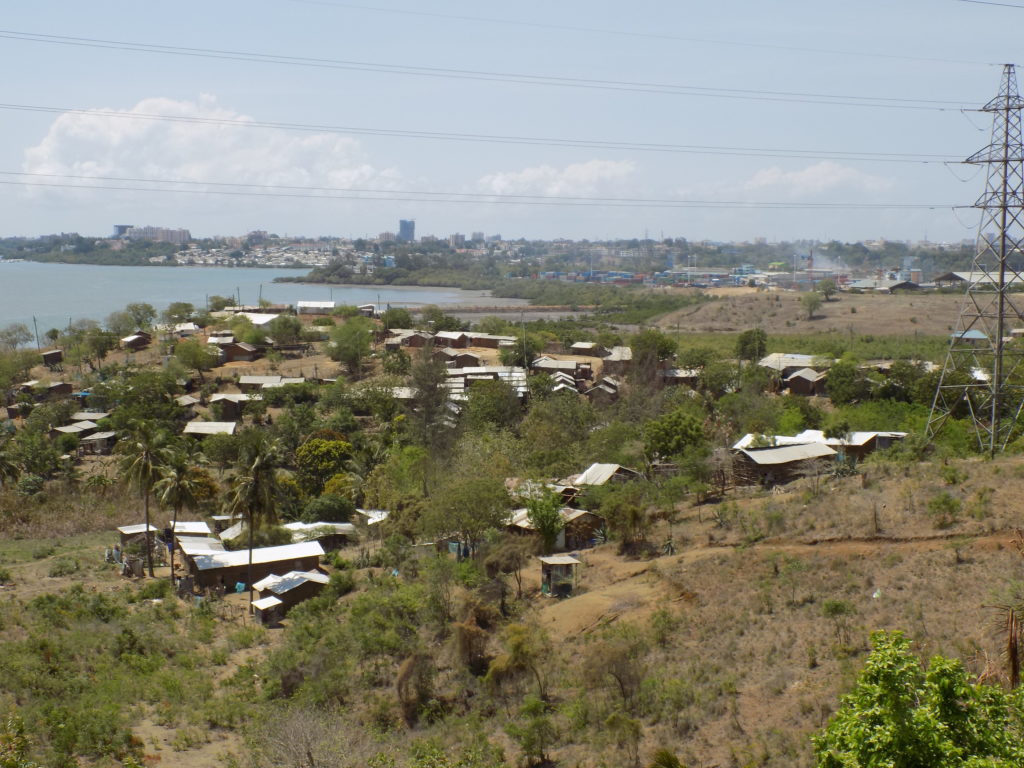 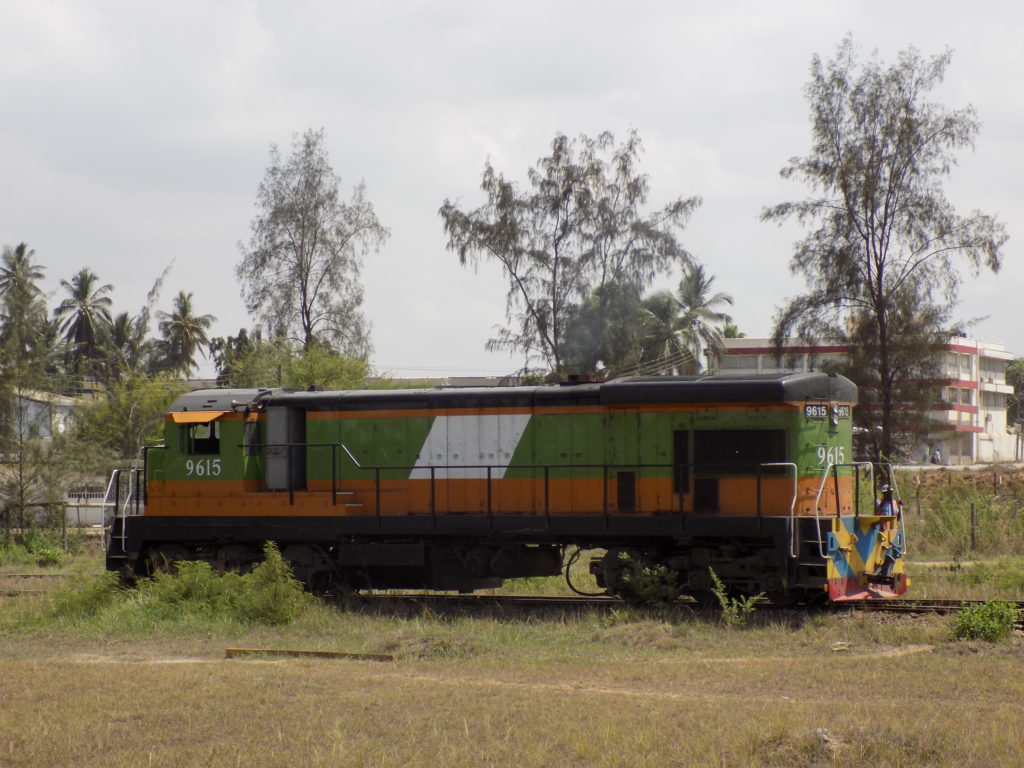 Train from Nairobi to Mombasa 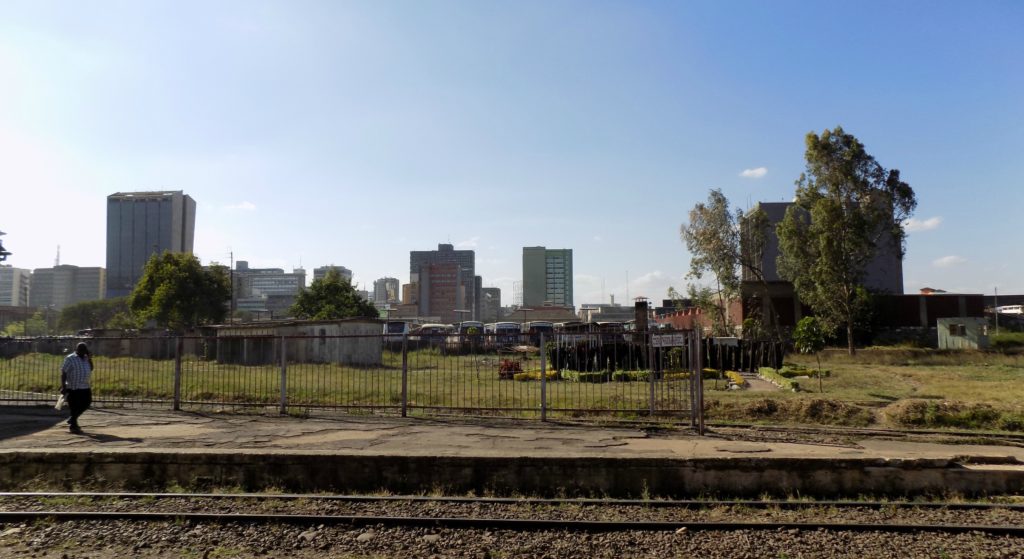 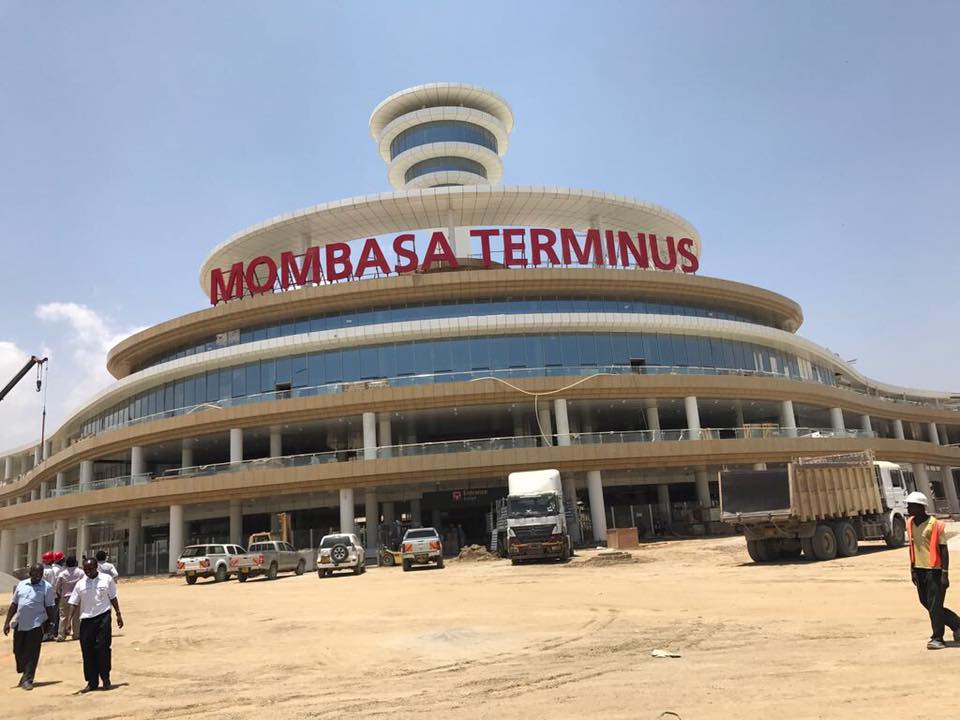 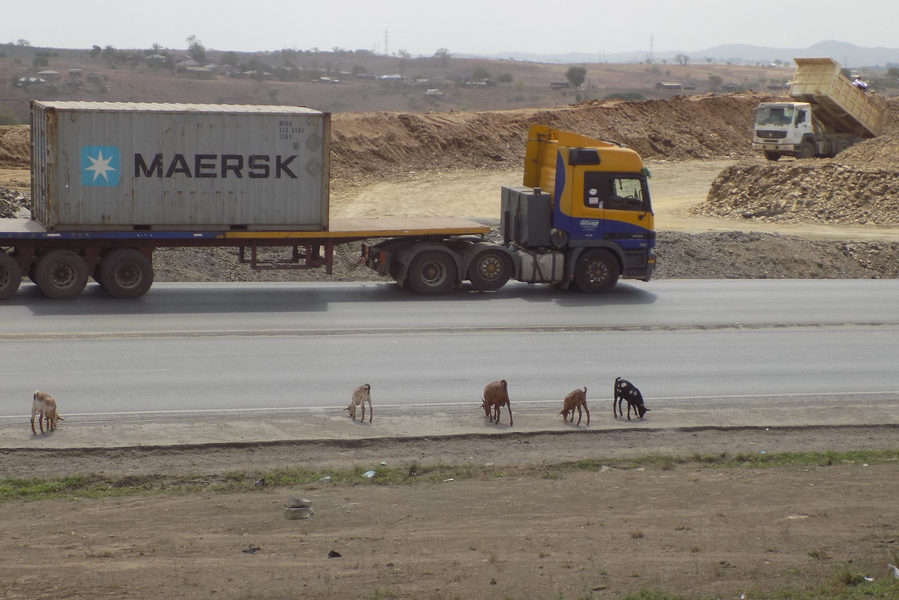 PS: if you have any questions or any helpful information please comment below.