When most people hear the name Brooklyn, New York, several drastically different thoughts might come to mind. Some people might think about a hilarious, Emmy-winning TV show from the 2010s.

Others might remember that Captain America comes from Brooklyn. And almost everyone imagines this borough as a huge concrete jungle. In reality, Brooklyn is a great place for backpackers.

Despite what you might have seen in movies and TV shows, Brooklyn has quite a few green spaces. Parks, hiking trails, and lakes, to be specific. These places will provide plenty of room for travelers to, well, travel.

Still, some of Brooklyn’s inner-city locales also make for great packing spots. This article will show you what it’s like to go backpacking through Brooklyn. It’s important to travel light on a trip like this. Use a luggage storage service to store your extra things.

Birds, bees, and rare flower species. All of these await you at the Brooklyn Botanic Garden. This venue first opened to the public in 1910. However, there were plans to build this place in the mid-1800s. Filling a 52-acre greenspace with lush and exotic plants wouldn’t be easy – anything worth doing rarely is.

Nevertheless, Brooklyn’s city planners made the botanic garden a reality. Since then, countless visitors have enjoyed this venue’s one-of-a-kind scenery. Each season brings new plant species to the garden, as well as special holiday-themed events. It’s no wonder so many folks get married here!

New York State is full of unique landmarks. The Statue of Liberty, the Coney Island Ferris Wheel (more on that one later), the Empire State Building – the list goes on and on. Moreover, most of these landmarks have played critical roles in iconic films.

Remind us again which skyscraper King Kong climbed up back in 1933? Which gigantic green statue has been torn up and blown up in countless movies and shows? The Brooklyn Bridge is just as iconic as any of these other landmarks. Millions of commuters and pedestrians cross the bridge every week. A few more backpackers would fit in perfectly with the crowd. 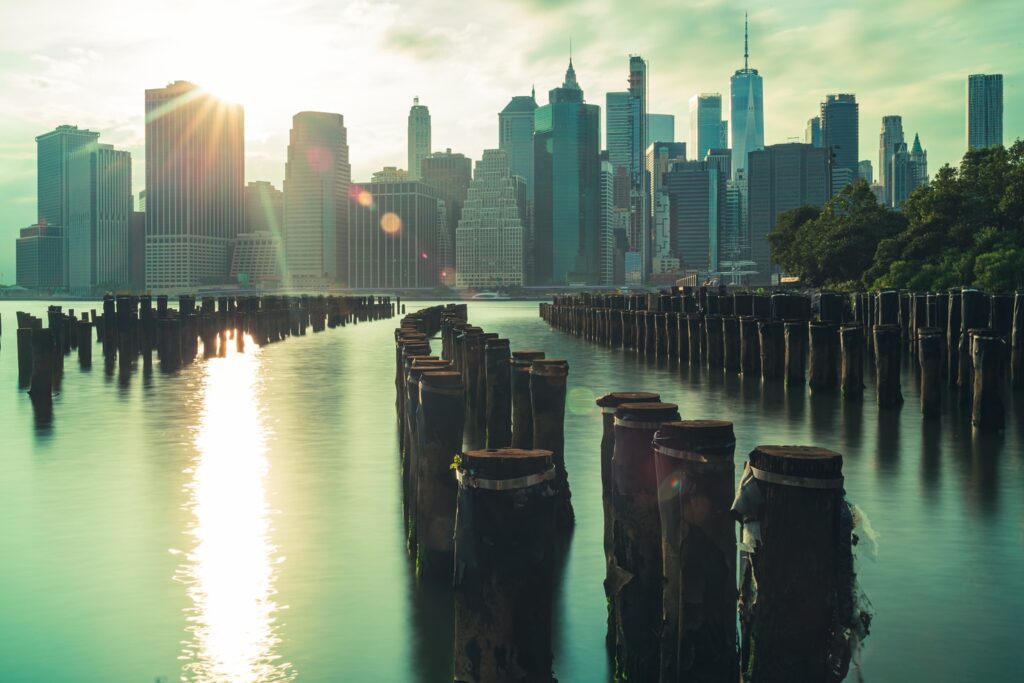 Photo by Andy on Unsplash

There’s a common misconception about backpacking that we’d like to dispel. Contrary to popular belief, you don’t have to trek through the woods for weeks or months on end to go backpacking. You can actually partake in this activity in the comfort of your own neighborhood – or somebody else’s.

Brooklyn Heights is one of the most well-known residential areas in the city. It’s full of long walkways, gorgeous architecture, and lively atmosphere. Backpacking through this part of the city is an experience you won’t soon forget.

Why not tackle this one sooner rather than later? After all, Coney Island is one of those places that you just can’t ignore. Once upon a time, Coney Island was the largest amusement park in America. Attractions like the Dreamland tower drew in visitors from other cities and even other states.

More and more attractions were gradually added over time, resulting in the wonderland that we know and love today. Backpackers will have a field day sightseeing, riding rides, and chowing down on cotton candy. We do recommend doing all of that after you ride the Wonder Wheel.

New York is famous for its towering skyscrapers and landmark buildings. We feel we’ve made that much abundantly clear with our first two entries. But, the Big Apple also has plenty of great parks and greenspaces to balance things out.

We’re not just talking about Central Park, by the way – as great as that park is, it’s all the way in Manhattan. Marine Park, on the other hand, is located in Brooklyn. This neighborhood is very green overall, what with all of the trees and fields you’ll find.

Whenever the word “prospect” is in a location’s name, you know it’s been around for a long time. Okay, okay, that isn’t always the case. Nevertheless, this certainly rings true for Prospect Park. Records indicate that this park was conceived in 1859, then built in 1867.

Several generations of New Yorkers have visited this park over the centuries. Special mention goes to Prospect Park’s Four Great Trees – each of which has been around for decades.

When New York is featured in movies and TV shows, a lot of emphases is placed on its cities and suburbs. If you didn’t know any better, you might think that the Big Apple is just one gigantic street. However, that’s not the case; New York is very close to America’s eastern coastline. As such, there are a lot of marshes and waterways nearby.

Special mention goes to Marine Park Salt Marsh, a watery trail that’s home to several unique animals. Most folks visit to catch a glimpse of these creatures. Others enjoy jogging, hiking, and backpacking along the Salt Marsh’s trails.

New York State has been at the forefront of many historical events in the US. Several World Fairs have been held here, and NY is one of the original 13 Colonies. It’s also hosted several civil rights movements for women, people of color, and LGBTQ communities. The Shirley Chisholm State Park is a tribute to the first Black Congresswoman in American history.

This airy park has lots of open space to explore. Moreover, it has several murals and decorations that honor Shirley Chisholm. This is easily one of the most inspirational venues in this article. The fact that Ms. Chisholm accomplished so much despite all of the odds set against her is nothing short of inspiring.