Wandering in Search of Nachu Caves

When Media outlets paint a bad image of a place, the news only makes a traveler more curious. It amplifies an adventurer’s excuse for escaping the normal. This could be for an hour, a day, weeks, or even months! It happened to me – but only for half a day!

After the completion of the Nairobi to Suswa railway line, local newspapers had run articles about the “Train to Nowhere”. And because it happened to be one of the Stations along the line, this news made me wonder what made Nachu “Nowhere”.

Hours and days and months passed and Nachu had almost escaped my memory. It wasn’t until we passed Nachu station during a Train Ride to Suswa that I recalled this fancy name. A week later, I came across a travel post about Nachu Caves which made tracing the caves a plot for that Sunday.

From Kikuyu, I took a left turn to a dirt road just past the Ruthigiti shopping center. “Nachu Secondary Schools” signpost and posters for ’50 by 100 plots of land at Nachu’ were enough assurance that this was the right road. Signs of rain made me hurry past a rundown public cemetery, churches, and settlements towards the distant hills and stopped at Nachu Shopping Center.

This center at a perpendicular intersection of two country roads in Ruthigiti/Lusingeti, Kikuyu constituency is nowhere on digital maps. Being a Sunday, most residents were in town. Some were shopping, catching up on the local buzz, and others passing by from elsewhere.

Like in most village towns, there was a salon, a corner Kinyozi playing reggae music, a grocery stand, a bar, and a hotel selling “Chips, Chai, Chapati na Mandazi”. Opposite the hotel were youths under a BodaBoda shade. Some lie on their motorcycles – on their back such that their legs rest on the pillion footpegs on each side and their heads supported by the fuel tank. The loudspeakers attached to the motorcycles played the latest Kikuyu songs.

A short walk from the center was what looked like the gates to nothingness. In contrast to the land behind me, this place was sparsely populated, windy, and dry. There were far voices of children calling out to their friends or siblings or parents, more birds in the sky, and arrays of distant hills.

As I approached one hill, I saw a man seated in an open field looking after cows and sheep, and goats. On seeing me he quickly stood up and made sideways glances. I decided to walk up to him and say hello hoping he might have some information about the hills. As I moved closer, he started walking away slowly but realizing that I had almost caught up, decided that I am harmless and stopped. By the rundown gate to this field was a warning sign to trespassers written with coal on a board – “Usiingize Ng’ombe hapa”. The herder knew he was trespassing on a property and had become alarmed on seeing me. After talking to him for a minute, I concluded that he either didn’t know much about the hills or he was taciturn and left for the nearby trail.

Unofficial Government Baboons and the Hills

A couple of meters away a troop of them sat probably deliberating on which farm to attack next. These were the Unofficial government baboons; the ones that don’t follow any game rules and whose day job is playing hide and seek with humans and invading farms at night. I walked closer thinking maybe they could lead me to the caves. After just a few steps, one of them noticed my approach and raised the alarm. For a few seconds, the primates lifted their heads and watched me before taking action. The matriarch sounded the emergency and the whole congress abandoned ship for the bush – the young ones first, followed by mothers with babies hanging from their bellies. Men and youth were last. Just like the herder, these baboons were not going to give me any information about the caves.

I gave up on the chasing game and retraced my trail up the hill. The sides of this trail had sharp-edged rocks washed clean by floods and their tops backed whole brown by the scorching sun. 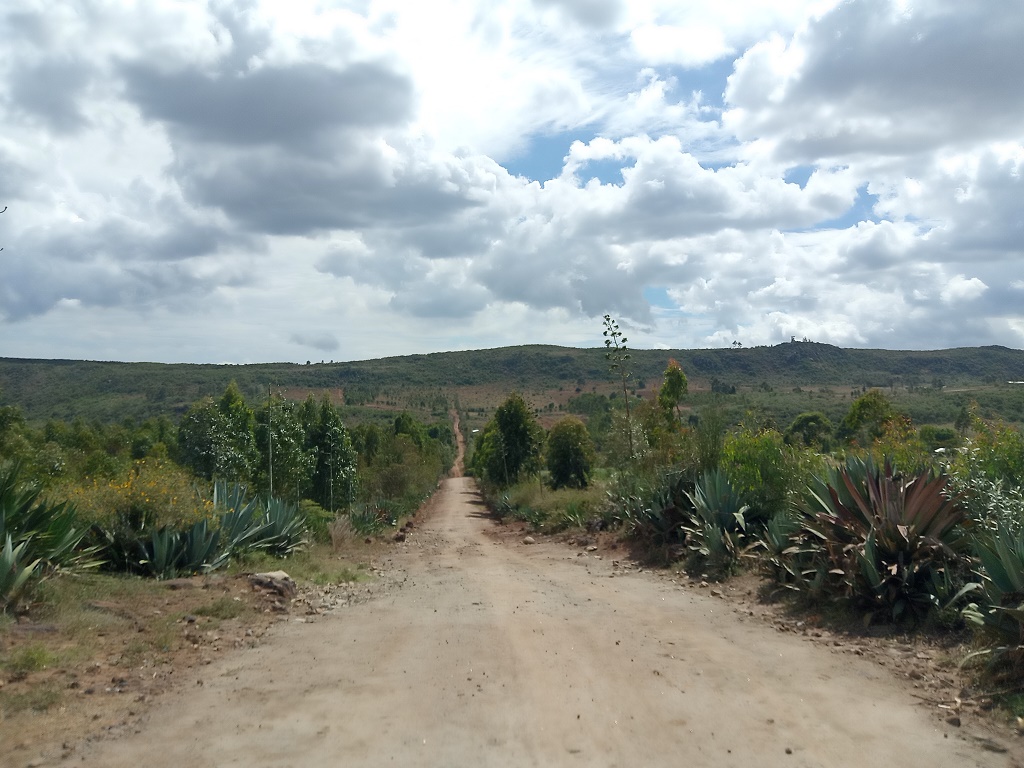 Old Man and the Nachu Caves

After more than two hours of wandering in this land of endless hills and valleys, it was clear that I wasn’t going to find the Nachu Caves, and turned around. On the way back I met an old man grazing his two cows and a donkey. After a conversation about the area, I asked if he knew about some caves around? “What are caves?”, He asked. I thought about the Kikuyu name for caves and responded, Ngurunga. “Oooh Ngurunga nicio caves?” he responded smiling deeply for the first time during our talk.

On his directions, I traced the Nachu Caves. They were not very far from where I had been but there was no chance of me spotting them, then. The two caves are located in such a place that one cannot see from up the hill. To access them, I had to crawl down to the entrance. Inside one I met worshipers who had made a pilgrimage to the holy caves for prayers. They were preparing wood for a bonfire later in the day. I was on a different business (exploring) and so after a few minutes, I went down aiming towards home. The sun was already slowly sinking into far hills and night was preparing to check in.

Hotel, Drunk Gentlemen, and The Way Back

Back at the shopping center, everything was at its apex – or so I thought. Women rushing home, Bunny Wailer’s “Cool Runnings” playing in the “All-Stars Kinyozi” at its loudest, and the last of the boys waiting for their heads to be shaven. Boda Boda youths were now hastily ferrying passengers home and young girls bought vegetables at the grocery stand.

I went into the hotel for a cup of tea and Mandazi. It was half full of men waiting patiently for the evening news. Their eyes were glued to the old TV screen, their hands forming a ring around tea mugs. The waiter came to me and asked which size of tea mug I wanted – glass or the “fifteen”. I said “fifteen” as everyone else seemed to drink from such. Time did not allow me to wait for the seven o’clock news as I still had a long way home.

Outside the hotel, two drunk gentlemen were singing to the notes from a motorcycle radio. One of them made people laugh with his comic dancing style. His torn shoes, black pair of trousers, a matching black coat over a faded t-shirt, and a ruling party cap on his head made the scene even more entertaining.

On the ride home I reminisced on the day’s wanderings. It was different from the one I had read from other travelers (like Let’s Drift Community). The Nachu I saw was definitely somewhere and the article about the “Train to Nowhere” probably did not include Nachu.

Or maybe I was only exploring the right side of Nowhere.