“Kilimambogo Unlocked”. That was the message on the wristband the lead guide gave us. It seemed like a memento meant to guilt-trip us into summiting the Ol Donyo Sabuk. But the thing about returning to the outdoors after a long break is that it makes you anxious. The night before a hike you stay restless, wondering if your feet would be kind enough to carry you for kilometers. Memories of hikes that went wrong come back haunting you. They remind you of how every trail has a new soul whether you have been there or not. However, the promise of that uniqueness and the possibility of new discovery masks all the negative thoughts. But then these memories return when you arrive and stare at the mountain, the hill, or the forest. I had these thoughts up until the first step on the trail.

While Mt. Kilimambogo scared me, everything else seemed to cheer me on; the pair of drunk men staggering home at 5 am, fellow hikers, early risers, and even the ‘giants’. Along the superhighway were these well-illuminated billboards. Safaricom encouraged me with the words “Twende Tukiuke – Let’s Go Beyond”, and Diageo called me to “Taste Perfection” with their Black Label. The bus driver cared too.  The gentleman didn’t believe in “the journey being the destination” cruising direct to Ol Donyo Sabuk National Park.

We arrived at the park gate on time. The moaning of the bus engine faded, and quietly the hikers alighted.  This was a reminder that the mountain was near. That it was taking a roll call of everyone aiming for the summit. That gambler knew the ones who had the key to unlocking and those who didn’t. And still, it waited for us. To humble, disappoint, or to encourage us on to William Hill, her kindred.

After a brief introduction, we started the day hike. The track was a well-maintained dirt road which took me back to history books. At the close of the nineteenth century, Kenya was largely unexplored. Country land was owned by communities and mountains were reverenced and preserved as sacred abodes of gods. It was the responsibility of tribal chiefs – who were believed to descend from God – to take care of these holy places. It is no wonder that, In the Kikuyu creation story, Ol Donyo Sabuk (Kia Njahi) was considered one of the limits of Kikuyuland as pointed out by Ngai. Back in those days, wildlife roamed everywhere making transport and communication very difficult.

In July 1889, Halford Mackinder, a British geographer, together with a party of Europeans and Native porters marched past Ol Donyo Sabuk aiming for Mt. Kenya. Over a century later, we were at the same Mountain, ready to kick off the first hike as part of the Journey to Mt. Kenya. Unlike Mackinder’s expedition, 170 strong and armed with guns, ours was a team of hikers ready to explore their limits.

Footpaths and the Endless Dirt Road

From the road, we turned left to a trail that served as the welcome back to the outdoors. This fair footpath spat us back on the dirt road where we trekked for a short distance before joining the second trail to the observation point. This path was steeper. Hikers went quiet and you could hear lungs echoing the double note symphony of breathing in and out. My left knee started acting up but I couldn’t entertain the thought of going back as I had already decided to the summit the moment I put on the “Kilimambogo Unlocked” wristband.

At the end of the second foot trail, we started the walk along the long winding road. Fog and the “distance to the summit” signs would have made the hike longer but the company of fellow hikers and guides made it enjoyable. Past one of the distance signs our guide led us on a left path to MacMillan’s grave.

About four years after Mackinder and his party passed Ol Donyo Sabuk, American Adventurer William Northrup McMillan arrived in Kenya together with his wife Lucie. Although they were only passing through towards Kisumu, the Macmillan’s got attracted by the landscapes around Mt Kilimambogo and decided it was a great place to settle. In 1905 Macmillan leased Juja Ranch of which the mountain was part. When he died in France (In 1952) his body was returned to Kenya and buried at Ol Donyo Sabuk. His wife Lucie continued to live in Kenya until her death in 1957 and was buried together with her husband. Next to the Macmillan’s grave are two others; Their Dog’s and that of Louise, who worked for the couple since she was 13.

We continued along the dirt road toward the summit, enjoying the beauty of the fauna and entertainment from birds and creatures of the forest. A sign indicated that the summit was only 1.6km away, and we could see masts towering over the trees.

“Is this the summit?”, I asked a hiker who I had walked with the entire endless road.

“I told you. Once you see the masts you’re there”, she said.

And there it was. The highest point on Kilimambogo – a grassy patch and masts and a concrete bench!

Kilimambogo Unlocked – The Journey Back

After a short rest, it was time to start back. Kilimambogo had been unlocked and the next target was the bus! By then fog had cleared so we could stop for a view at the Observation Point. On one side below the mountain were beautiful landscapes and settlements. And on the other 14 Falls and distant hills of Ukambani were visible.

Hiking down along the footpath with a runner’s knee was unpleasant, but nature’s beauty made it endurable. It connected a traveler with themselves and the surroundings. Looking back, it was easy to see why the Macmillan’s and their guests – including U.S. President Theodore Roosevelt – loved Ol Donyo Sabuk that much. Our ancestors cherished the mountain too and Hikers go back there again and again. And that’s probably why Mackinder referred to it as “The Great Mountain”.

At the gate, we met our lead guides for a brief orientation of the Beginner to Mt. Kenya program and Robert said, “Congratulations, you’ve unlocked your first mountain”. This made me conclude that Mackinder could have used the same words. His team was tired, but he had to encourage them since their Journey to Mt. Kenya was still long.

A hike is usually over when the “trail bus” hits the tarmac. Before our bus did, I glanced outside and saw “Naomba Kuendelea Butchery”. The name was like a prayer to gods of the hills, mountains, and trails. To accept and guide us wanderers and hikers and adventure seekers into their realm. The driver indicated and turned left on the A3 towards Thika and Nairobi. We were back to the familiar world as fast as we had left it. 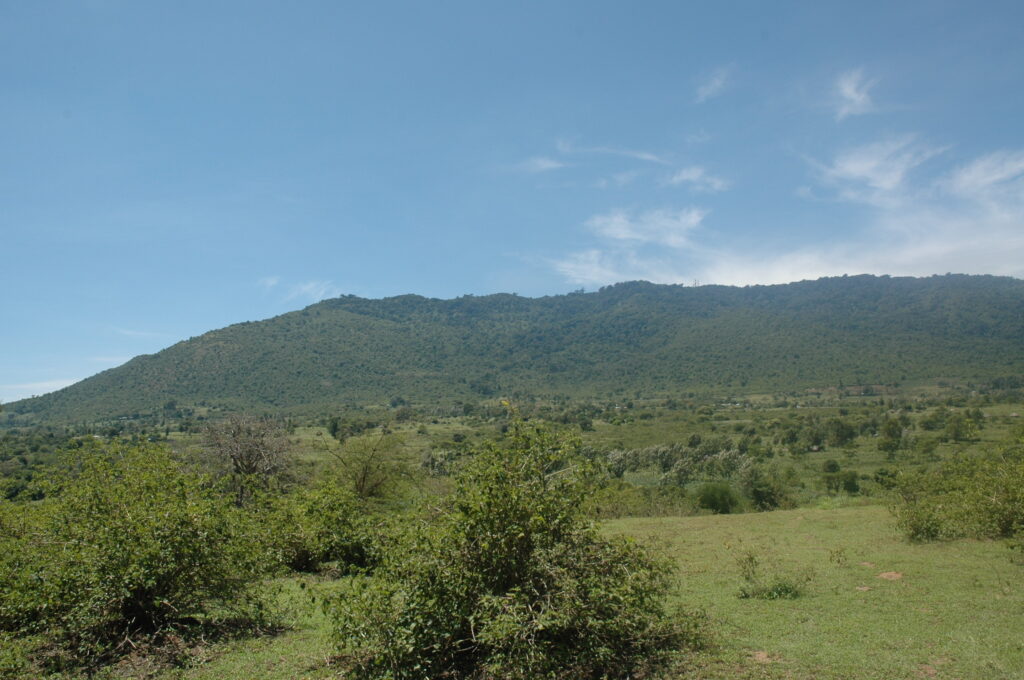 Location: Inside the Ol Donyo Sabuk National Park. About 65Km from Nairobi. At Thika, you’ll follow Garissa road (A3) up to Makutano Junction then turn left towards Ol Donyo Sabuk Town.

Activities: Hiking and Camping (There are a number of sites inside the park).

Hike: One can go with a hiking group or use the services of Local Guides at the Park.

What to Carry: Identification Document, Water, Snacks, and Rain Gear.