A Plot for Sunday – Train Ride to Suswa

In 2020 I had planned some very cool train rides. Some local, others further away to the south. I had the Shosholoza Meyl in South Africa, Benguela Railway, and the TAZARA in mind. But COVID-19 happened! This Virus had all these trips and many more journeys canceled.

Sitting still however was no option. Because the wandering voice is always whispering “Let’s go out somewhere”. And you can’t ignore it for long.

On this day I heeded the call for adventure and headed out. Not to go far away, but to see where this train ride would take me. The long-distance train between Nairobi and Suswa had just resumed operations and being a train travel junkie, I wanted to try it out.

By 8:30 am I was at Nairobi Terminus’ booking window and bought a return ticket. The Mombasa bound train had just left and the speed of activities at the station building was slow. Cleaners lazily mopped the floors while hostesses at the train doors took their time to welcome passengers.

The train had four (4) coaches and each of them had no more than twenty passengers. For a moment I agreed with critics that this was “a train to nowhere” but later on I realized that Suswa was indeed somewhere!

Inside coach number four were about 12 passengers – me, a father with his son and daughter, three railway maintenance men, a couple, and train attendants. The little girl listened to her dad as he explained the warning signs on the platform walls while the boy walked along the coach length with a Camera around his neck. One of the railwaymen looked impatiently at the departure time board while the other two were quiet and taciturn.

“The World’s only Wildlife Capital”

At exactly 8:50 am, a signalman raised and then waved a red flag. On his third wave, the train began its journey towards Suswa leaving behind stewards who lined up along the platform – all in an attention position.

A few minutes later the train was cutting through The Nairobi National Park. Through the window, a traveler could spot lonely gazelles, buffaloes, Giraffes, open roof safari vans with local tourists, and a river dividing the park and settlements of Ongata Rongai.

Ongata Rongai Train Station is located on the right side during the onward trip. It was at this station that the majority of passengers boarded the train – mostly local families going on a round trip. What started off as an empty train was now almost full and I could now hear more of the familiar dialects.

Towards the tunnel at Embulbul

The train rode towards Ngong with the coach now very lively. Families taking train trips and excited children giggling and asking their parents to take pictures of them shyly. We arrived at Ngong station on schedule. The Ngong Hills and Wind turbines were visible to the left and at this Station, more passengers boarded the train.

Everyone went quiet when we entered the tunnel at Embulbul. Running a good 4.5 km, this tunnel is one of the longest in Africa. After the tunnel, we started traversing the Maasai country. On both sides were rocky hills, scattered settlements, high rock cliffs, goats, and occasional Maasai women dressed in beautiful tribal clothes.

The adjacent seat had been occupied by a middle-aged man who boarded at Ngong station. This gentleman boarded the train and unlike everyone else, he folded his hand, tucked his chin to chest, and slept. As we approached the second tunnel he woke up and started a monologue with me.

“We laid all these tracks starting from Syokimau to Suswa. The tunnels and bridges were the toughest. Now it’s maintenance work and the dry port….”

I asked him about how local people received them.

“They are very friendly people.”

He was headed to Maai Mahiu for work. To him everything outside the window was ordinary. He had seen the pylons and power lines before. This hilly country was his workplace, the train chasing birds aroused no curiosity and every minute toward Maai Mahiu brought him closer to work.

We passed through the third tunnel at Nachu. Children on the train had already perfected the art popping their ears open and were now demonstrating it to the fatigued adults. Some of them were already dozing off and asking how far we were from Suswa.

The train went past the deserted Nachu Station and came to a stop at Mai Mahiu Station.  “Mimi nimefika”, the railway builder said to me as he rose and walked to the door.

Past Maai Mahiu station there was the Naivasha Dry Port. Further ahead Manyattas and huts with wattle walls were visible with more and more stone blocks and iron sheet houses coming up.

We arrived at Suswa Train Station at quarter to 11 am. As soon as the train stopped, I headed out as I wanted to hike up a nearby hill and still be able to catch the return train at 16:45 pm.

After the ticket scanning point, I walked past the grassy parking lot to the only shop around. The keeper’s merchandise was a few sodas, two dozen water bottles, and biscuits. I purchased a bottle of water and walked towards Suswa Shopping center where I wandered for the next few hours. 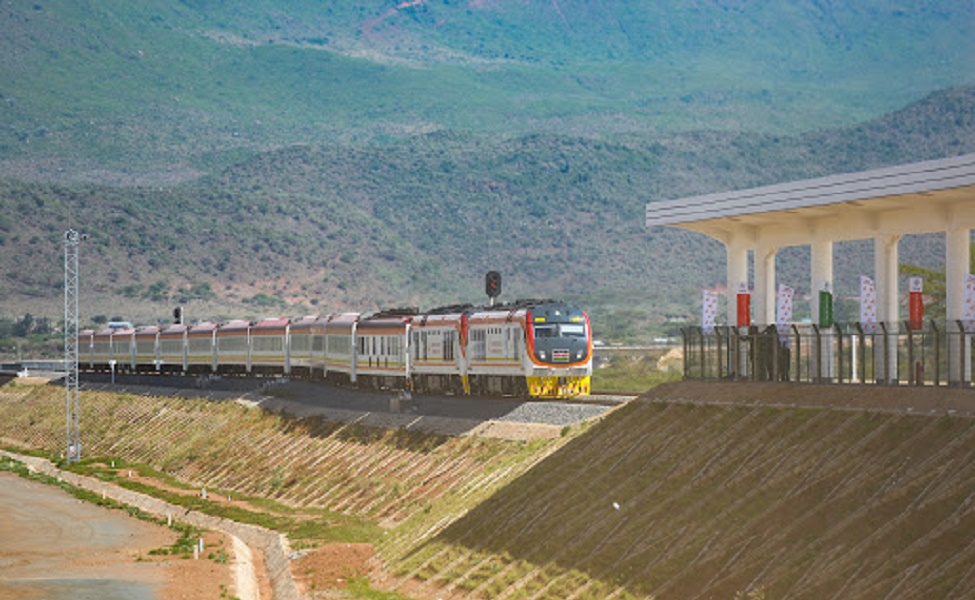 The Ride back to Nairobi

I had quenched the wandering thirst enough to justify the ride back home. And if someone asked me about the ride, I would say to them that; I had listened to giggles of excited kids on the train. I had seen men sitting under the shade of acacia trees and women heading home carrying firewood. Watched boys grazing healthy goats and sheep and cows and bulls. And in all these, my fellow travelers would back me up.

As soon as the train left the station I leaned by the window and looked back on the trip. What could I recall?

Suswa is a vast and mostly bare country. When you travel, you realize how big Kenya is. You learn that there are places where people, leave alone their flocks, do not recognize boundaries that are meant to separate them by the form of county lines. Rocky hills, badlands, dust, acacia trees, and strong communities are what characterize this part of the Nation. The only visible hints of life are water holes, goats like dots grazing on the distant hillsides, Manyattas, and abandoned huts.

If a traveler cared to get a memento or a nice keepsake for their friends in the city, a rock pebble would do. If the heat was a little bit forgiving – which is not – this could be by all means a hiker’s paradise. A wanderer tired of the fast life in the city would find peace hiking these hills.

The country is the same from Suswa to Mai Mahiu. It is past Nachu where everything starts to change. Manyattas and wattle walls are replaced by stone blocks and colored tin roofs. You see more people on green farms and others walking along better roads. The main boundary between these parallel lands is a 4.5 Km tunnel that starts at Embulbul near Ngong.

The sunset while crossing Nairobi National Park. Its glow painted the sky below the Ngong hills and the Suswa side orange. The sound of the rails against the tracks grew as the engine approached Nairobi Terminus. My wandering voice was now calm. A reminder that there’s beauty if we look and that when adventure calls, we should listen.

Things to do close to the Nairobi Suswa line.

A Plot for Sunday

The Suswa Long Distance Train is mostly a passenger train for travelers between Nairobi and Suswa through Rongai, Ngong, and Maai Mahiu. However, it also offers a great experience to people who wish to find pleasure through the window seat. The train ride is a good plot for Sunday (or Wednesday, Friday, and Saturday too) to a restless wanderer.

The hills are visible from Ngong Station and to an adventurer not very far from the station. It is possible to trek from the station to the Hills through settlements and Ngong town.

Hiking and Camping at Mt. Suswa

If you are intending to hike Mt. Suswa over a weekend, you can complement it with a Train ride. Mount Suswa (a volcano located along the Great Rift-Valley) is one of the best-hiking destinations in Kenya. There is also a campsite at the Suswa conservancy.